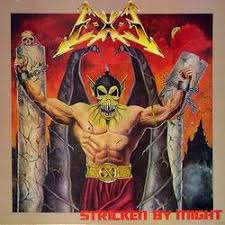 What is this? A “real” thrash-metal band from New York, on vinyl, no less?

Well the first two songs “Slaughter Disorder” and “Stricken By Might” sound damn authentic enough. But as of “Autopsy” it becomes increasingly clear to me that E-X-E is one of those bands that don’t seem to know from one song to the next if they want to be ‘total thrash’ or not.

There’s this hardcore influence that creeps into the aforementioned “Autopsy”; which ain’t bad at all, actually, and a sprinkling of homeboys, Anthrax. Uh-oh, what’s happening here?

“Metal Hell” is a ridiculous anthem song with ridiculous lines like “stand up and shout’ and ‘shout it out loud’ being spewed. Is New York itself that gives up sarcastic and cocky band-isms? Take Anthrax and Kiss as prime examples.

I find that it is Joseph Palma, on lead vocals, that appeals to me the least, trying to be the ‘singer’ too much. Mr. Palma is always trying his very best to impersonate Joey Belladonna (lead singer of Anthrax).

Here is a case in point: The last song on side one, “Slayer”, where the music is thrashing pretty honestly but Palma tries to put too much melody into a song that shouldn’t have any. ‘Side Pooey”/(as opposed to side one’s ‘Side Icky’), starts with “Martial Law” and already my interest has begun to wane.

Yet it all is madness: The redeeming tracks kick in my head, amply. The best song on “Stricken” that is “Fatally Wounded” kicks out the jams. And then we have the closing track, “Crib Death” with the guitar & bass cranked out by R.H. Boeckel replacing Palma on lead vocals, which shows the correct ‘singing’ method for E-X-E. After you hear these tracks yourself you will know that I am saying that E-X-E needs a growler. The vocals are messing with things on this Debut LP.

The crassness of this band is worth a buy.