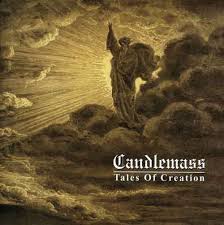 The Number one band of the 70’s for must of us hard rockers/heavy metallers is Black Sabbath.

The Number one band of the 80’s with a Sabs-like presence is doom metallers Candlemass.

Candlemass were formerly monickered Nemesis, in a quite different incarnation, making one EP circa 1984. Maybe you can dispute what I am saying but don’t care. Both of these bands are the heaviest and maybe we can all agree on that.

Okay. You may be asking yourself why the Candlemass/Sabbath comparisons again? After all, “Tales” is Candlemass’ fourth full-length LP.

Here is why: Like Sabbath’s fourth LP, “Volume Four” from 1972, Candlemass’ fourth LP are both strategically career-placed to be the most depressing albums ever made.
Black Sabbath had on “Volume Four” the track, “Under The Sun”. Candlemass have “Under The Oak”. And please compare the album covers, also.

Leif Edling (Candlemass’ band leader / main songwriter / bassist) has had “Tales…” available as a demo for a long time. Mr. Edling said, after “Nightfall”(the ‘Mass’ second LP) came out, in various mags that after a third album (of course the sparkling “Ancient Dreams”) that he would release this eleven-part epic onto the unsuspecting public.

Another curiosity is the inclusion of a track which has appeared already on the debut disc; the afore-mentioned “Under The Oak”. “Under…” is now done justice as the song is now heavier, tighter, and with more depth in the lead guitar department. Eddie ‘Messiah’ Marcolin is tremendously resonant with his vocal treatment of this old song. The lyrics are crisp and clear.

What also benefits “Under” is the fact that it is bookended by “Voices In The Wind”(a spoken intro before it) and by “Tears”(after it). Parts, rather than songs, these tracks are indeed. What we have are interlocking parts that fit together perfectly. Leif Edling has surely planned things out. Most albums are not as consciously prepared, like “Tales Of Creation”.

The stand-out cut is the album’s most plodding, depressive cut. It is Part seven, “The Edge Of Heaven”. Out of all the eleven parts only seven are real songs.

Most critics have avoided the storyline because, true to most Candlemass efforts, the words are so fantastically written that they can’t fathom them out.

Take the old demo instro “Into The Unfathomed Tower”, for pure unfathomability. It has it’s own parts, this track!

Artch (and to a lesser extent, possibly Hexanhaus) are power metal’s best.

Simply amazing is Sweden’s Candlemass. And so is their “Tales Of Creation”

P.S.: The only low point on “Tales Of Creation” is Part Eight- “Somewhere In Nowhere” which is almost the same note-for-note, somewhat, as the second Candlemass LP- “Nightfall”‘s tune, “Samarithan”.

Black Sabbath-like bands have sprung up. And Candlemass continues to hold their own doomy torch, four albums in.