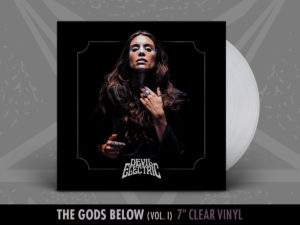 Powerful, heavy guitars with great tone and a great steady riff greet the listener as the Australian Devil Electric’s “The Gods Below” gets started. It is a 20 minute + well produced recording.

Devil Electric formed in 2015 and they really seem to have it together.

First album Black Sabbath — “Hand of Doom” in particular — is, surprisingly/uncannily, a very good reference for the assault of “Holy Ghost”, in particular though the other songs certainly do carry a bit of the U.K. Doom masters’ influence. The bass guitar and creepy crawly guitar ala Sabbath’s Tony Iommi can hardly be classed in the narrow bracket of “Stoner Rock”, though make no mistake by trying to judge this band’s music merely by the category it gets tossed in on social media. Pierina O’Brien’s vocals though are more akin to what a female might do in a European Doom Metal band.

Stoned Witch, Acid King, Hollow, Ruby the Hatchet, and Acrostichon fans will surely also thrill to the sounds of Devil Electric. It is good that the band’s music can really groove when it wants to so it can appeal to a wide section of people across the spectrum from Metal to Rock.