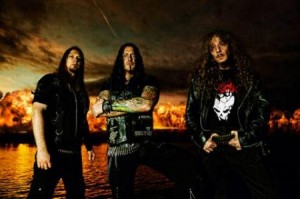 On May 22, Aniruddh “Andrew” Bansal of Metal Assault conducted an interview with bassist/vocalist Marcel “Schmier” Schirmer of German thrash metal veterans DESTRUCTION at the Key Club in West Hollywood, California. You can now watch the chat below.

“Day Of Reckoning”, the new album from DESTRUCTION, sold around 800 copies in the United States in its first week of release. The CD landed at position No. 58 on the Top New Artist Albums (Heatseekers) chart, which lists the best-selling albums by new and developing artists, defined as those who have never appeared in the Top 100 of The Billboard 200.

“Day Of Reckoning” entered the German Media Control chart at position No. 95. The CD was released in Europe on February 18 via Nuclear Blast Records. The first limited edition of the album does not feature the band’s logo on the booklet while the vinyl version and second pressing of the CD shows a red DESTRUCTION logo on it.