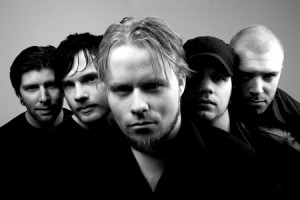 Bernhard of Austria’s Stormbringer.at webzine conducted an interview with rhythm guitarist Andreas Gerdin and bassist Johan Hedlund of MACHINAE SUPREMACY, the five-piece from Luleå, Sweden whose particular take on metal reflects the influence of video games on contemporary culture, before the band’s April 29, 2011 concert in Vienna, Austria with CHILDREN OF BODOM. You can now watch the chat below.

MACHINAE SUPREMACY released a career-spanning collection, “The Beat Of Our Decay”, in the U.K. on March 28 via Spinefarm. The 16-song compilation features tracks from the group’s last three studio albums — “Redeemer” (2006), “Overworld” (2008) and “A View From The End Of The World” (2010) — all available on the Spinefarm label. In addition, it includes a previously unreleased cover of “Paparazzi” by LADY GAGA, plus a song recorded for the “Redeemer” album (“Fury”) that was eventually offered as a free download to fans via the band’s official web site.

MACHINAE SUPREMACY’s “Force Feedback” video can be viewed below. The song comes off the band’s latest album, “A View From The End Of The World”, which came out last year via Spinefarm Records.