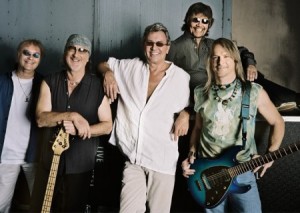 DEEP PURPLE earlier in the month kicked off its first tour in North America in four years. The pioneering rock band — featuring classic members Ian Gillan (lead vocals), Roger Glover (bass) and Ian Paice (drums, percussion — is performing for the first time in the U.S. and Canada with a symphony orchestra in each city (except San Francisco). Fans can expect to hear the band’s trail-blazing iconic hits — including “Smoke On The Water”, “Highway Star”, “Hush” and “Space Truckin'” — plus other favorites achieve a new dimension of sound with the added heft of a symphony orchestra.

A two-and-a-half-minute video report from the Artisan News Service in which DEEP PURPLE singer Ian Gillan talks about the current tour can be seen below.

“This one isn’t going to be orchestra-based so much as: It’s the rock band DEEP PURPLE playing, with strings and horns being added for some color textures,” DEEP PURPLE guitarist Steve Morse recently told The Star-Ledger. “We’re not going to change the songs — I mean, there’ll be a few little cameos and features — but the basic idea of the show is: We’re doing what we do, and having more texture where it’s appropriate.”

According to Morse, a conductor is travelling with the band on the tour and regional musicians are playing shows wherever geographically convenient.

“There are a few shows where they’re going to travel a bit, but mostly, it’s going to be local,” Morse said. “Our arranger-conductor — since he plays violin, actually, very well — will be in charge of making sure they know what to do.

“Most important is keeping them on the beat with the music. A lot of classical players can read music great and everything, but the whole rhythm thing — maybe they don’t feel how exact it needs to be to make rock ‘n’ roll rock.”

Regarding the combination of “classical” and rock, Morse told The Star-Ledger, “For me, styles in music are very blurred. I don’t see a line, really, defining them. But I know people do, so I try to be aware of them from time to time. Rock and classical styles seem to blend very well. You know, rock has always had the same chords, really, as classical music, the same notes — with the exception, possibly, of some of the bent notes on the blues scale.

“I don’t think it’s too much of a stretch to combine the two. With most styles of music, it’s really more about attitude and the repetition of certain things that define a style. I always encourage people to think of music as just one thing, with lots of variety naturally built in. The best musician of all, I think, is one that has seen and done it all.”