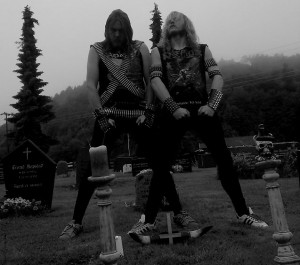 Do you have $6.66? If you do, and you like Black Metal you may want to pony up that money and clip it over to Hell’s Headbangers. The reason being that DEATHHAMMER has put out their third album this year of 2014.

DEATHHAMMER proudly proclaim in the Metal Archives, online, that they are an interesting bit of “trivia”: “On the cover of the DARKTHRONE album “F.O.A.D.” from 2007, the DEATHHAMMER log appears on the leather jacket of the drawn figure.

The previous two albums, “Phantom Knights’ 2010 and “Onward To The Pits” 2012 were raucous affairs, certainly, but now DEATHHAMMER has gone for the jugular on their full-length studio album.

With the release date set for December 9th, 2014, I’d get the calendar out now.

“Satan Is Back” is the perfect opener. With a Cronos-like VENOM swagger vocalist Sergeant Salsten eases into his best ONSLAUGHT “Fight With The Beast” voice. Thrash with elements of Death/Grind pump from Salsten’s guitar and bass (yes he does both). Sadomancer completes the duo and whacks the crap out of his kit. With a style like that found in early SODOM and BATHORY, but recorded in fine fashion, the battery bashes and crashes. “Power Trip” is the other pre-release cut and it doesn’t fail to rev up the action. Bloodcurdling menace in the vocal department means total domination. A, first two LP, Voi Vod-ian drive exists in the musical framework of DEATHHAMMER who have come on in leaps and bounds. The lead guitar solos are all delivered upfront and spellbindingly blinding!

What a freakin’ tidbit this is.

I can’t wait to hear the whole album.

Fullmoon Sorcery can be fun!