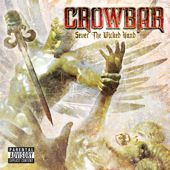 Kirk Windstein is best known recently for his Down side project. But for underground metalheads we like him for what he’s done with Crowbar. And they are back. 2005’s “Lifesblood For The Downtrodden” may have seemed like Mardi Gras town’s lost rebel yell.

Good sewer metal. Yes that old axiom ‘sludge’ being poured out slowly from the drainpipe known as America. 1991’s debut Crowbar LP, “Time Heals Nothing” made the ultimate statement with the title alone.

EHG or Eyehategod are the self-hating poster boys of anarchy for this part of the world while co-conspirators Crowbar are true artistes.

The riffs are still down tuned and ‘disgusted’ is still the prevailing attitude.

“Sever The Wicked Hand” not only has a great title. Jeez, it’s almost as good as “Time Heals Nothing”.

The musical experience is much akin to buying that next roll of toilet paper at the local bodega.

« Manowar – Thunder In The Sky Destruction – Day Of Reckoning »