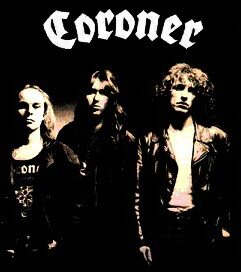 Coroner returns. To whet our whistles we have a brand spanking new collection called “Autopsy”. How could a band that started their career with Tom G. Warrior of Celtic Frost/now-Triptykon, on vocals — on the band’s “Death Cult” demo — not be immortal enough to return!  If you are a huge Death and Thrash Metal fan then you should be as happy as I am. “R.I.P.”, “Punishment For Decadence”, “No More Color”, “Mental Vortex” and “Grin” all were amazing and entertaining, very heavy albums. But with the self-titled “Coroner” album in 1995 as their swan song the Swiss band returned to obscurity’s seemingly-eternal grasp.

Coroner returned in 2010/2011, 2013 and 2015 for festival dates — recently conquering Latin America. Their bludgeoning assault is captured in this mammoth collection: Greatest hits, live tracks and a documentary of their history. All with the expert guidance and glossiness of a Century Media Records’ product.