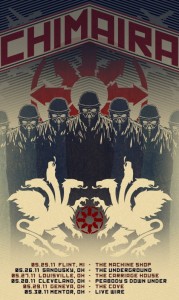 Although D’Amond will sit behind the kit for all of CHIMAIRA’s upcoming shows, the drum tracks on the band’s recently completed new album were laid down by the CD’s producer, Ben Schigel, who has previously worked with DROWNING POOL and WALLS OF JERICHO, among others. Tentatively due in August in North America, South America and Japan via eOne Music, the effort was mixed by Chris “Zeuss” Harris (HATEBREED, SHADOWS FALL, MURDERDOLLS, 3 INCHES OF BLOOD) .

CHIMAIRA took part in a live video chat on the band’s Ustream channel on April 14. Footage from the chat can be seen below.

Drummer Andols Herrick announced his departure from CHIMAIRA earlier this month, citing “some of the same concerns that” keyboardist/programmer] Chris Spicuzza “mentioned in his statement [announcing his split from the group], namely the current state of the music industry and concerns about my future.” Andols added, “A major transition in life is much more manageable at 31 than it is in your late 30s or early 40s, so as a guy with literally zero experience in anything else, better now than later. Plus, it would be hard to go back without feeling constantly uneasy about the situation.”

Spicuzza explained his exit from CHIMAIRA by saying that the “situation in CHIMAIRA had ultimately become a negative environment that I had to get out of. Secondly, the music industry is completely fucked and honestly, I became concerned for my future. The amount of work and stress I took on got the best of me. I guess if you’re not happy or having fun, what’s the point?”