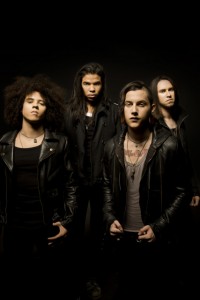 “That Fire”, a brand new song from the Miami hard rock quartet BLACK TIDE, can be streamed at this location. The track will appear on BLACK TIDE’s sophomore album, “Post Mortem”, which is scheduled for release on August 23 via DGC/Interscope Records.

Commented the band: “This is just a fun song for everyone out there. Total party song, and one of our faves.”

The “That Fire” video will make its online debut on Thursday, June 23 exclusively on IGN.com. It will be available via the band’s YouTube VEVO channel the following day.

Behind-the-scenes footage from the video shoot can be seen below.

“Post Mortem” was written and recorded in the summer of 2010, and is the follow-up to 2008’s “Light From Above”, which garnered instant critical acclaim from Rolling Stone, Spin, Revolver and more.

The band followed the release of “Light From Above” with an appearance on the inaugural Rockstar Energy Drink Mayhem Festival, performed on the main stage of Download 2008 and capped it off by playing the entire 2009 Vans Warped Tour.

In April 2011 BLACK TIDE was added as support for the only two announced U.S. dates of IRON MAIDEN’s “The Final Frontier” world tour, which took place in BLACK TIDE’s home state of Florida.

BLACK TIDE will hit the road later this year as part of the Rockstar Energy Drink Uproar Festival. The trek will run from August 26 through October 15, conquering North America with a massive active rock lineup which features veteran acts AVENGED SEVENFOLD, BULLET FOR MY VALENTINE, SEVENDUST and more.

Commented Garcia: “August 23rd 2011 will be huge step in our lives. Not only as a band, but as people. This record means everything to us. We poured our heart and soul into this and have been waiting for it to come out like the rest of you.

“‘Post Mortem’ is the name of the record. It means ‘after death.’ The reason we love this title is because we feel that we are so lucky to be able to be doing this, and having an opportunity to put our music out there is honestly the closest thing to heaven we have on this earth. It’s a like a dream.

“We love all our fans and hope to see you all at the Rockstar Energy Uproar Festival this summer! This is the beginning of a long, crazy and yet beautiful ride.”