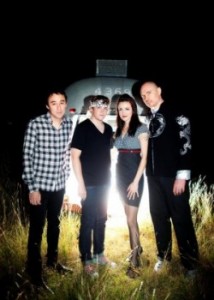 According to The Pulse Of Radio, SMASHING PUMPKINS frontman Billy Corgan has said in a new interview with Rolling Stone if fans assume they’ve heard all the unreleased material from the band’s history, they’d better think again. Corgan explained, “I’ve gone on some message boards to see what fans are saying, and they think they’ve heard everything and they haven’t. There’s a lot of stuff we have that no one’s ever heard.”

Corgan made his comments following the announcement that the entire PUMPKINS catalog will be reissued over the next few years, in deluxe editions with bonus content. The singer and guitarist said that for the band’s 1991 debut, “Gish”, “There are something like 30 demos from even before the album was made. So a lot of that stuff needs to be remixed, and there’s a lot of good versions of things and unheard stuff.”

The first reissues, of “Gish”, 1993’s “Siamese Dream” and 1994’s “Pisces Iscariot”, will arrive this fall. Each is expected to include one full disc of bonus material.

The PUMPKINS are also working on a new album called “Oceania” that will also surface this fall. The disc is considered part of the larger project called “Teargarden By Kaleidyscope” that they started in late 2009.

Corgan said about “Oceania”, “My friends said that it reminds them of what they always liked about the PUMPKINS, but it sounds fresh. It has a familiarity to it, which is kind of hard to put your finger on it, but at the same time, it doesn’t sound like, ‘Oh, it’s the same.'”

The PUMPKINS also plan to tour later this summer and fall, although dates and cities have yet to be announced.