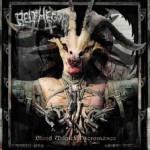 Gone are the days of 2009, on ‘Walpurgis Rites- Hexenwahn’, when I’d rather listen to Nifelheim and Dark Throne than listen to Belphegor’s latest racket, sounding like rusty wire electrocuted in a vat of ice water.

I couldn’t listen to their Christ scraping metal.

2006 was a better year for me and the band Belphegor from Austria.

The ‘Pestapocalypse’ proved that even the wicked can be redeemed.

I felt that Belphegor had succeeded after many noisy attempts at getting it right.

Like a circular saw that is capable in the right serial killer’s hands of slicing the jugular vein, Belphegor have hit pay dirt with ‘Blood, Magick, Necromance’.

These blackened souls have found a safe harbor to execute their victims without anyone complaining afterward.

Everybody out there into Extreme Metal is in for treat.

I always thought that Belphegor had a ton of promise even on the first few albums.

‘The Last Supper’ from 1995, the debut LP, was Gore drenched Black Metal — BlackGore, if you will.

So what’s up with the new one?

Let’s check out the highlights:

‘In Blood- Devour This Sanctity’- the song holds the skeleton key to unlock the door of this very special album with song lyrics scaped in scathing verbiage as is the rest of this album.

A spiraling staircase of Death Metal rifferama that isn’t blastbeaten to death like recent past efforts by Belphegor. ‘Blood’ comes off as more authentically Black Metal, in the truest sense of the words. This track is twelve minutes of sheer bliss.

‘Rise To Fall And Fall To Rise’- is smashbeat central. Let me explain what a smashbeat is to those of you not in the know. It takes a very gifted band working in tandem to create the inverse blast or what I have labeled the smashbeat.

This is what ‘Freezing Moon’ by the exalted The True Mayhem from Norway had shimmered and dazzled with back in the heady days of the 1980s.

‘Impaled Upon The Tongue Of Sathan’- what if early Venom on ‘Black Metal’ from 1982 or ‘Welcome To Hell’ from 1981 possessed the musical chops to pull off stuff that Ved Buens Ende, again a band from the mighty Norway, can lay claim to?

The answer is that it would have sounded exactly like ‘Impaled’.

But I need to be critical and dismiss Ved Buens Ende for not keeping things simple.

The demonic growling part of the lead vocals has always been done down to a science with these Belphegorians; therefore it hasn’t been the problem on any of their albums. Now it helps our Austrian heroes with a winning solution. Great music is being made on this here LP.

The need to listen to angry gruff death metal voices that simply sound pissed is negated in the hands of the fully matured Belphegor.

Belphegor are now among the Black Metal Godz.

What we have at the end of ‘Impaled’ is breathtaking in it’s scope and refreshing in it’s creativity. I speak of the arpeggiated end of this song. What a spectacular finish to a grisly composition.

Belphegor have come a long, long way. I hope I have made that clear. You may still be a little skittish about their latest LP in light of what I have been saying. Especially since I have commented on the ups and downs and inconsistency of this band.

All is forgiven on ‘Blood Magick Necromance’; the title being straight out of the Quorthon Bathory book as you’d had all better know about ‘Blood Fire Death’ as one of the top albums ever in the Black Metal cache.

If you plan on visiting the darkness this year; make sures it’s Belphegor.

They look like a Black Metal Manowar: Strong, proud, fierce.