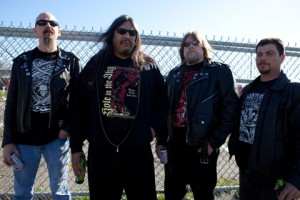 “Macabre Eternal”, the first full-length album from the legendary San Francisco Bay Area gore grind act AUTOPSY since 1995’s “Shitfun”, sold around 600 copies in the United States in its first week of release. The CD landed at position No. 67 on the Top New Artist Albums (Heatseekers) chart, which lists the best-selling albums by new and developing artists, defined as those who have never appeared in the Top 100 of The Billboard 200.

“Our fans can expect no less than our best, the best we have to offer,” Cutler added. “If you like AUTOPSY, you will think this is the best.”

AUTOPSY drummer/vocalist Chris Reifert previously said about “Macabre Eternal”: “We’ve brewed up the sickest and heaviest material that our rotten souls could possibly spew forth, and we are confident that it’s our best stuff yet. The EP was a taste of what’s to come, but now it’s time for the full assault from beyond the grave.”

He continued, “The album will contain no repeated EP tracks, no re-recorded old songs, no triggered trickery, and nothing less than the pure death metal brutality that AUTOPSY has always delivered.”

AUTOPSY had previously decided to make an official comeback after working together on two songs for the special 20th-anniversary edition of debut album, “Severed Survival”, in late 2008; the band having originally split before the release of its fourth album, “Shitfun”, in 1995. A five-song EP, “The Tomb Within”, came out last September and saw the original trio of Chris Reifert, Danny Coralles and Eric Cutler joined on bass by Joe Trevisano (ex-ABSCESS).

“I usually cringe when I hear ‘reunion’ or ‘reformed’ or whatever,” Reifert told Decibel. “It usually means people are out of ideas. We really have no interest in reliving the past. That’s what was cool about the songs just coming to us instead of our trying to force it. We can’t tour, and if we could, we still wouldn’t want to. But as long as we enjoy recording, we’re going to stay at it. It’s not a one-off or a two-off or whatever. Right now, there’s a lot of energy in the band, and it’s not going away anytime soon. We have a few things to take care of, for sure.”

Video footage of AUTOPSY performing “Always About To Die” at this year’s edition of the Neurotic Deathfest, which was held April 29-30, 2011 at 013 and MIDI theatre in Tilburg, Holland, can be viewed below (courtesy of “triptykon”).