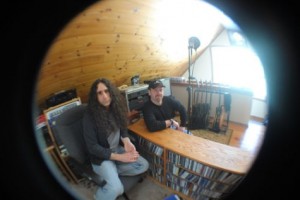 FATES WARNING/OSI guitarist Jim Matheos and former FATES WARNING singer John Arch are currently working together on a new full-length album, “Sympathetic Resonance”, that will be released in North America on September 13 via Metal Blade Records. The band, called ARCH/MATHEOS, began tracking the drums on January 12 and continued to record through mid-February with both John Arch and Jim Matheos producing the album. 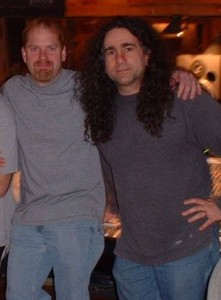 Comments Matheos: “I think John and I work really well together. There’s a lot of mutual respect and trust in what we do. But we’re also both very critical of ourselves, and each other. This can make for a long and sometimes tedious process. But ultimately it’s one I enjoy because I think it brings out the best in both of us.”

Adds Arch: “When I first heard some of the arrangements Jim had written and recorded, it took quite some time before I could wrap my mind around the odd time signatures and guitar work going on here. There are some long compositions, so putting anxiety and apprehension on the back burner it was time to dissect these numbers into digestible bits. After the lengthy process of lyrics and melodies, listening to the songs now, I can’t imagine them any other way.”

In terms of the lyrical content on “Sympathetic Resonance”, John Arch notes that “the lyrics this time around are more in line with [Arch’s 2003 solo EP] ‘A Twist Of Fate’ and not of the mystical nature of some past albums.”

A recent video interview with Matheos and current FATES WARNING lead singer Ray Alder in which they discuss the ARCH/MATHEOS project can be viewed below.

Arch’s solo EP, “A Twist Of Fate”, was released in 2003 through Metal Blade Records. The CD was recorded at the Carriage House studios in Stamford, Connecticut and featured guest appearances by Matheos, ex-DREAM THEATER drummer Mike Portnoy and Vera.