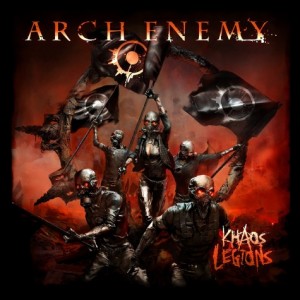 “Yesterday Is Dead And Gone”, the new video from Swedish/German extreme metallers ARCH ENEMY, can be viewed at www.khaoslegions.com. The clip was directed by Patric Ullaeus of Revolver Film Company, who has previously worked with DIMMU BORGIR, LACUNA COIL, IN FLAMES, SONIC SYNDICATE and KAMELOT, among others. The song comes off the band’s new album, “Khaos Legions”, which will be released on May 30 in Europe and June 7 in the U.S. via Century Media Records. The CD marks the band’s return to new, original material, after the release of the “Tyrants Of The Rising Sun – Live In Japan” live DVD/CD (2008) and the re-recordings album, “The Root Of All Evil” (2009). The effort was tracked at Sweet Spot Studio in the south of Sweden with engineer Rickard Bengtsson (who produced 2005’s “Doomsday Machine”).

The “Khaos Legions” artwork, which comes courtesy of renowned artist Brent Elliott White (MEGADETH, DEATH ANGEL), can be viewed below.

Commented ARCH ENEMY guitarist Michael Amott: “Here’s the visual companion to our new song, ‘Yesterday Is Dead And Gone’. As you will see, we had a riot making it!!!

“The new ‘Khaos Legions’ album is to my ears our most diverse and musical creation to date.

“I’m looking forward to unleashing the ‘Khaos’ worldwide a few weeks from now!”

ARCH ENEMY drummer Daniel Erlandsson previously stated about the new CD, “We had a very inspiring and creative time writing this album. I think this is definitely evident when listening to the new songs. There’s tons of variation in the material, ranging all the way from very melodic to extremely heavy.

“As you can expect there’s no shortage of killer riffs and intricate guitar work; the Amott brothers [Michael and Chris] have come up with some very cool yet demanding ideas!

“This album has some of the fastest songs I’ve ever recorded, along with a bunch of heavy pounding mid-tempo songs.

“As always, it’s difficult to describe music in words, but rest assured — this album will be one heavy fucker!”

ARCH ENEMY has teamed up with the German edition of Metal Hammer magazine (out now) and Sweden’s Close Up Magazine (out May 3) to offer you the perfect appetizer for the upcoming album, “Khaos Legions”, which will be in stores later this spring all across Europe. Both magazines are featuring a special ARCH ENEMY CD compilation with the title “Dawn Of Khaos”, which includes two exclusive new songs of their upcoming album, “Khaos Legions”, a rare KISS cover song, two previously unreleased live tracks and seven classic songs taken from previous ARCH ENEMY albums.

The track listing is as follows:

“We are proud that our Swedish brothers in metal return with another great album! And we are glad to present two new songs and 10 more tracks in our upcoming magazine,” said Robban Becirovic, chief editor of Close-Up Magazine.