Acrassicauda – Only The Dead See The End Of War 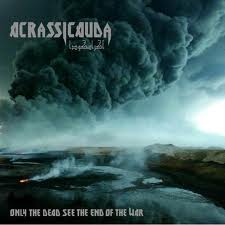 Do you know of this band from Iraq who have finally made their long awaited record debut 10 years on from their beginnings in war torn Baghdad, Iraq, named Acrassicauda?

Well, you are missing out on the heaviest, newest, best heavy metal band on planet earth.

I repeated myself on purpose so that you would know how serious I am about what I am writing.

Total originality is something unheard in Heavy Metal music; though it is something that has happened alot in Rock/Hard Rock and Progressive Rock history.

Acrassicauda is the Metal embodiment of a war machine hell bent on singing about what most of the world can only pretend to know about:

War in the Middle East.

Acrassicauda have put out a 4-song EP that is over 20 minutes and bares a tag line that could be said now in retrospect of the latest world headline news of Osama bin Laden’s being found and killed on May 1st, 2011 as an eerily prophetic paean to th tyrants/dictators/despots of the major wars on planet Earth; including Joseph Stalin, Adolf Hitler and their own country’s Saddam Hussein who all met with premature, gruesome demises just as the title reads to this EP: ‘Only The Dead See The End Of The War‘.

Iraq is a close neighbor to the countries of Iran and Afghanistan.

Catapulted along by a guitarist that fires off note sequences, (check out this EP’s ‘Message From Baghdad‘) like they were a hail of machine gun bullets and doles out chord patterns that scorch the ground like a nuclear blast ripping the Earth’s crust.

The exacting spider-like drumming (check this guy out in the ‘Garden Of Stones‘, which is a track from this EP, also in a video on Youtube for proof of this jawdropping style). Acrassicauda can also boast of a bassist that bores holes in the ground with every note.

The now New York based, after being granted asylum in the United States in 2009, Acrassicauda, is monickered after the latin name for some kind of black spider species.

Acrassicauda, mark my words, are about to conquer the world. This band is truly amazing.

Thank God they are musicians and not the enemy because these boys ain’t playin’ on their pessimistically titled ‘Only The Dead See The End Of War‘.