THE POODLES: ‘I Want It All’ Video Released 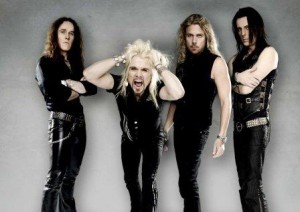 “I Want It All”, the new video from Swedish hard rockers THE POODLES, can be viewed below. The song coms off the band’s fourth album, “Performocracy”, which was released on April 15 in Europe (May 5 in North America) via Frontiers Records. The CD was again produced by Mats Valentin, but this time Tobias Lindell (EUROPE, MUSTASCH) mixed the 12 outstanding tracks that make up the effort.

According to a press release, the “Performocracy” title is a combination of the words “performance” and “democracy,” meaning “the power of performance” or “rule by performance.” The album was again produced by Mats Valentin, but this time Tobias Lindell (EUROPE, MUSTASCH) mixed the 12 outstanding tracks that make up the CD.

“I think we have followed through on what we started with the last album, ‘Clash Of The Elements’,” explains singer Jakob Samuel. “Besides continuing to work with producer extraordinaire, Mats Valentin, we took a step further with some of the material that was hinted at on ‘Clash Of The Elements’. On ‘Performocracy’ there is a more epic and darker character to some of the songs that we wanted to explore in more detail. Having said this, we have definitely stayed with a lot of the signature melodic elements that are trademark of the band.”

“One important aspect of having a few releases in the bag is that you know more what you want as a band,” says bassist Pontus Egberg. “Someone once said that ‘if you want to dream big, you have to dream in great detail.’ To us this means that we take all the knowledge and experience that we have acquired from our previous efforts and use that to plan ahead and make our dreams bigger.”

As the album title suggests, performing songs live is the reason for what THE POODLES are as a band. A full European tour is planned for the early fall, with dates in South America and Japan also in the works.