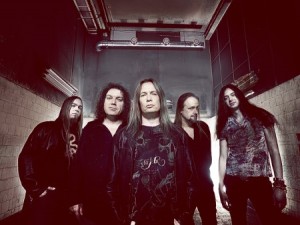 On January 28, 2011, Jason Saulnier of the MusicLegends.ca web site conducted an interview with STRATOVARIUS keyboardist Jens Johansson. You can now listen to the chat in the YouTube clip below.

“Elysium”, the thirteenth full-length studio album from STRATOVARIUS, entered the official chart in Finland at position No. 1. The CD was released in Europe on January 14 through earMUSIC/Edel and in North America on January 18 via Armoury Records.

An e-card for “Elysium” can be accessed at this location.

Check out audio samples of all the songs that appear on the CD at Amazon.co.uk.

“Elysium” was released as a regular CD; a deluxe digipak edition with bonus track; a “collector’s edition” (featuring two exclusive bonus tracks on a seven-inch single); and on vinyl.

The cover artwork was created by Gyula Havancsák and can be viewed below.