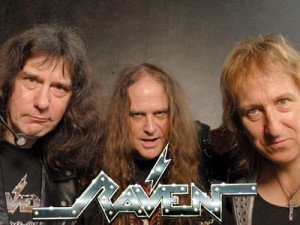 Wikipedia defines Raven, and rightfully – may I add – as an English heavy metal band associated with the New Wave of British Heavy metal movement.

The band has been active as of 1974 with singles preceeding the classic trio of albums that formed the spine of earliest Speed Metal (Raven were simply referred to as fast or hyperactive); consisting of “Rock Until You Drop”(1981), “Wiped Out”(1982), “All For One”(1983). Maybe that should be four albums of classic early fast Metal as “Live at the Inferno” was the epitome of the English trio’s  blitzkreig attack as personified by the bookending with 18 songs inbetween of the title track (The Inferno is 1:21 as track one at the beginning of the album and The Inferno is 6:54 as track twenty, at the end) – A lesson in Metal overkill that the band with the name Overkill couldn’t hope to grasp of how to do.

There was Motorhead and Venom, and Witchfinder General as the only extreme-grasping bands. Samson with the leather-masked, crazy Thunderstick – an odd name for a fellow, right(?) would produce Iron Maiden’s famemaker, Bruce Dickinson. Judas Priest ruled the ruins, alone, of Metal as they had put out albums since 1974 and were well established as this NWOBHM got underway. Saxon started making albums in 1979 but as Stallions of The Highway these Englishmen played their brand of Metal straight and proud.

By 1985 the mass O.D. of extremely crazy Rocknut songs like “Take Control”, “Mind Over Metal”, the one-two-three bang up anthem “Crash Bang Wallop”, “Faster Than the Speed of Light”, the anthemic “All for One” tune, “Tyrant of the Airwaves”, “Don’t Need Your Money”, and finally the lunatic slams of “Break the Chain”(#1 song where Headbangers are concerned)/ “Hell Patrol” were all exhausted having appeared as singles and a part of the “Live at the Inferno” spectacle.

It appeared that way, anyways with the absolutely disappointing, and the first for Atlantic Records to boot fourth Raven slab of studio trax.

But come the fifth studio album in 1986 something amazing happened. Raven were writing songs that stuck like gum to the skull. Shouted out choruses like on the title song, “The Pack Is Pack” and “Screamin’ Down The House” had transformed this crazy arsed band into something akin more to KISS: The producer? The renowned Eddie Kramer, and that’s why. The second track, however, “Gimme Some Lovin” (by Spencer Davis, Steve Winwood, and – cough, cough, wheeze, wheeze – Muff Winwood) was three minutes and fourteen seconds that could’ve have well of had been called ‘The Sinking of The Goodship Gallagher” as the lunatics couldn’t handle this one being played by Raven: The band that could do no wrong till The Pack came Back with Cack.

EPs “Pray for the Sun” and “Mad” both in the year 1986 were exercises in commerciality that should’ve done a “2112” and done exactly what the freak they wanted. Instead caving in to big record mogul-speak another 1986 thing happened: The sixth Raven album, “Life’s A Bitch” was recorded at the tail end of the worst year in the band’s career. Rob Hunter was credited as playing drums, but the wacky part of his name and his playing were gone and not again to return. (Curiously he did play with the ill-fated – /I say R.I.P. Dawn Crosby-fronted/ Detente who made a really good album with Hunter among their band alumni).

It was time to get some real firepower in the band. Exit the shadow of the man that was once known as Wacko and enter Joe Hasselvander: The Mountain, The Man, The Myth and absolute Metal and proto-Metal legend. This guy played on Blue Cheer’s final album for chrissakes! He played in doomsters of Virginia, Pentagram. I am just hitting on a few points out of Joe H.’s resume as the man who would singlehandedly one day go on to make an album that can match the first Black Sabbath album both in the artwork and the Dooom Metal music.

But back to Joe ‘the miracle’ Hasselvander that would bring the Metal Lunatics back with the 1988 masterstroke LP “Nothing Exceeds Like Excess”. “Gimme A Break”, “You Gotta Screw Loose” threw an Anvil curve, Joe’s American roots showing (Robb Reiner would be proud of me with this scroll) throughout an album that ended with a song called “Kick Your Ass”. And it did. The pack were truly packing heat.

Right in time for the 1989 “The Ultimate Revenge 2” with Forbidden, Death and Dark Angel sharing the Splitlight with RaVen (capitalization for the fact that this was a different band almost entirely).

The amalgamation showed it’s bountiful class and skill on the 8th Raven studio endeavor, “Architect of Fear” where 54 minutes and change changed the whole future of the Newcastle on Tyne -rooted Rockers.

More of the same came with “Heads Up” as “All for One” was dusted off ‘live’along with more new tracks that fans of Architect were clamouring for.

9th studio album “Glow” sparkled and shined with 12 tracks of Metal mastery. The boys weren’t fooling around anymore and had grown into a bona fide legend with Joe manning the skins.

Then it arrived: Japan was set alight. “Destroy All Monsters – Live…” crashed, banged, walloped and stampeded it’s way through 1:13:50 of total sheer Metal madness. “Medley” closed the album at 13:20 and remains the most insane Speed Metal closing track on a ‘live’ album ever. Yes, there is a Drum Solo track especially for King Joe H. at Track #14 just before the medley. “Architect of Fear” sounds great. Bass solo and guitar solo is included. There is another “Medley” at track #6 where “Speed of the Reflex/ “Run Silent, Run Deep”/ “Mind Over Metal” are reprised from the earlier albums in full flux.

10th studio album “Everything Louder”during a tough time in the Metal realm gets the faithful full of faith in what Raven can do for the tenth opus with “!!!”, “Wilderness of Broken Glass”, and “Holy Grail” being as outrageous sounding as the titles of the songs imply.

“Raw Tracks” in 1999 would be chock full of for-fans-only demo, ‘live’ and covers stuff, and serve to herald the advent of a brave new century.

11th studio album inverted the earlier catchphrase and great song and album title, “All for One” with “One for All” and the iconic trio would plow on with battle-ready material designed for the diehards.

Disaster would strike John Gallagher though and a horrific injury would sideline the band till 2009 proved what we all knew: that Raven could “Walk Through Fire” and not got burned. Conversely, they would burn up the stages around the world, sporting new tracks “Against the Grain”, “Trainwreck”, “Grip”, “Armageddon”, “Breaking You Down” and “Attitude” – to burn!

Now the DVD. Now the world is getting Wiped Out by the mighty, perservering Raven.

Written in anticipation of a special event in the world of Heavy Metal music.

Open at 6pm – till closing which could be around 4am

The show will be, as per the usual for the Saint Vitus bar, streaming live on

The trailer film shows the band’s lightning attack with shrieking utterances, as the band perform their brand of athletic rock, a term they coined long ago when Rob “Wacko” Hunter was on drums.

Here is the wording on the poster:

Burning Across The USA & Canada

(Tony Dolan, obviously, though curiously his name is not mentioned except -)