https://www.youtube.com/watch?v=o67HnxC4RTg – watch the new JUDAS PRIEST title-track from the upcoming “Redeemer Of Souls”! 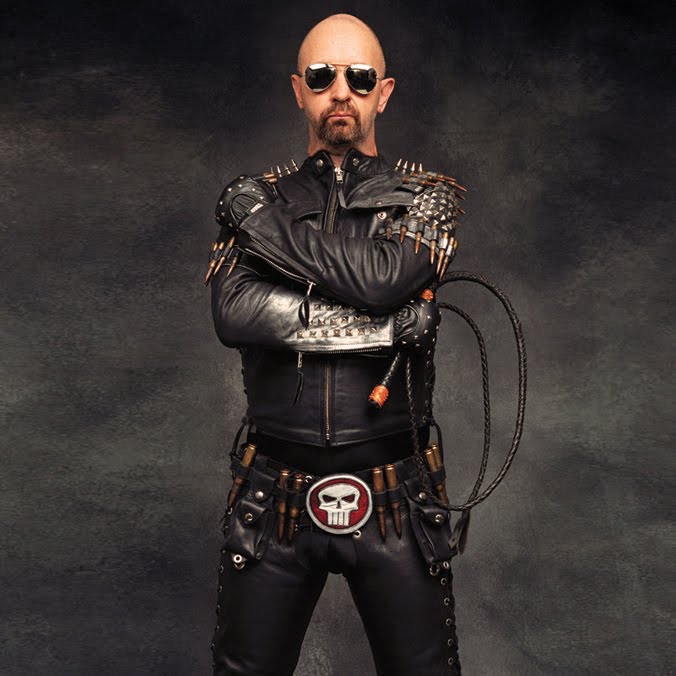 ROB HALFORD – ABOVE – SOME SKULLS ARE GONNA ROLL AS ROB HALFORD BREAKS OUT HIS SAVAGE FULL REGALIA FOR THE APOCALYPTIC YEAR OF 2014. METAL HAS RETURNED. JUDAS PRIEST ARE THE SIGN OF LEATHER AND VOLUME THAT SIGNALS THE RETURN! PRIEST! PRIEST! PRIEST!

Queensrÿche is UP FIRST, (though)!

Geoff Tate’s Queensryche days are numbered; (and yeah, it is okay to leave the umlauts out — unless someone cough-cough-wheeze-wheeze pulls a fast one and confounds people by naming their band ‘Queensyche Without The Umlauts’).

It is now fact that at the stroke of midnight, August 31st the world will witness a significant change for Geoff Tate and his beloved band, Queensrÿche. There won’t be any more Queensryche. Not for the leather-lunged belter Geoff, anyway.

Singer extraordinaire Geoff Tate lost the bitter 2-year court battle over rights to use the name Queensryche to the instrumentalists who also have been performing and recording under the same monicker.

Queensryche — “Frequency Unknown” — (is) the clear winner, as ‘Ryche studio albums go in comparing the post-breakup albums, as far as I’m concerned. Geoff Tate’s familiar voice spoke to me in a characteristic manner that new vocalist for the now official only Queensryche couldn’t. Yes, Todd La Torre, new Queensryche frontman, can technically hit the high notes and do the “old stuff” but it’s not the same to me. You see, I was there when it all went down in the first place. Anyone who was alive to see the rise of Heavy Metal music in the vernacular will know that Queensryche were the first and best Progressive Metal band. Zebra got there around the same time in heavy history and Fates Warning, and Dream Theater followed right on the heels of these explosive outfits.

Queensryche made a self-titled album in 2013, confidently letting the band name speak for itself. A commemoration of 30 years of songs written by some of the guys in this line-up on that fateful 1983 debut disc, staking its claim.

Let’s take Roger Waters and Pink Floyd. He lost the right to use the famous Prog band’s cool name but got to keep “The Wall”. Geoff Tate gets to keep the name “Operation: Mindcrime” I and II. If it all sounds strange, this court decision, it really seems that Rock and Metal and Prog were never meant for a courtroom. Remember how strange it was seeing Rob Halford queried by the judge about the “better by you, better than me”, “do it, do it!” debacle. Halford sat in the per usual hot seat adjacent to the judge, and proceeded soft-spokenly to come off like an angel. Not guilty for inciting or inferring anything horribly suggestive with his lyrics, your honour.

Back in the early 1980’s when I first heard Queensryche, it was the low-to-high-note soaring vocals shown off by their singer Geoff Tate that froze me in my tracks. The song was “Queen Of The Reich”. Queensryche has the distinction of being one of the only bands I ever heard of that debuted with a Mini-LP.

The songs from the Mini-LP (Wikipedia say it’s an EP, but that’s not what we called it way before this Internet thing came along)

A deep purple color filled the vinyl front cover with the glorious gold Queensryche logo in gold, as a frame-trimming as well, as fall of 1983 brought the Chris Degarmo-penned “Queen Of The Reich” (4:21 — why do I always think that its longer in my mind’s ear?), and the DeGarmo — Tate composition “The Lady Wore Black” (6:13 — the showstopper!) as the Mini-LP’s clear highlights.

The cool “Nightrider”, penned by Chris DeGarmo and Michael Wilton got second place in the tracklist. “Blinded” by the just-aforementioned two guys, got the deep-cut 3rd spot in the track-listing.

I guess it was considered a Mini-LP because unlike other 17 minute and 27 seconds long platters, this disc was a bona-fide 12-inch 33 r.p.m. deal. It wasn’t put on the somewhat more considered, and certainly smaller and demoure 7-inch 45 r.p.m. format.

The 1988 re-issue, tagged on an addition Queensryche original called “Prophecy”. I loved the DIY feel of the original Mini-LP but leaned in to listen to this track anyway and a big smiley grin filled by face. The total time elapsed for the Mini-LP now?: 21:26. The Compact Disc format had just taken hold around this time in recording industry history, (btw).

In 2003  the to-be-expected, as the record business loves milking a good album for all it’s worth, an elongated version of the original eponymously-titled “Queensryche” got released. It contained this running order/tracklist: 1. Queen of the Reich 2. “Nightrider” 3. “Blinded” 4. “The Lady Wore Black” 5. “Nightrider” Tokyo Japan – recorded live 8/5/1984 (as per tracks 6-10, also) 6. “Prophecy” 7. “Deliverance” 8. “Child of Fire” 9. “En Force” 10. “Blinded” 11. “The Lady Wore Black” 12. “Warning” 13. Take Hold of the Flame” ( a Tate and Degarmo-penned scorcher, at 5:12) 14. “Queen of the Reich” (*this* time credited solely to DeGarmo!)
Deja Vu, it feels like, as I’ll use the Priest-Rÿche comparison again. Once upon a time, a strong Heavy Metal screamer/belter named Tim Owens commanded the mighty Judas Priest.

I despised this move by the mighty ‘Priest but, then again, a Glenn Tipton solo album didn’t and doesn’t carry much weight. (Much like, to my eternal chagrin — fellow Metalhead band Iron Maiden bass thumper, Steve “Harry” Harris’s  recent solo album un-heavy dud).

Onward they flew into the land of every Heavy Metal cliché this side of Manowar’s occasional stumbles (I luv Manowar, so don’t start with me). Okay, more appropriately — I’ll will offer — Graveland (I listen to music for music’s sake as a musician/journalist myself, so don’t start with me) early-career sometimes not-so-good Q-throne-isms. Graveland, from Poland, hit very heavy, as in Heavy Metal for those who don’t know. And the Q-throne is of course the vacated seat of the man now in Valhalla: Quorthon Bathory. A band who evolved into an amazing true-Viking Metallic treat.

Anyways, Ripper Owens fronted J.P. for the albums “Demolition” and some other trash. Though, I do luv J.P.’s “Cathedral Spires” (okay? so don’t start) and “The Ripper” was tailor made for this cat, “Ripper”.

So there are 15 glorious studio discs, altogether with or without Geoff Tate. 1984’s “The Warning”with “Take Hold Of The Flame” and “Warning” — just as good as anything from ’83’s “Queensrÿche”, opening volley. 1986’s “Rage For Order” as 3rd in the discography contained the corkers “I Dream In Infrared”, “Walk In The Shadows”, and “Screaming In Digital”. The Tate-isms were intense and of a high-talent caliber. 4th disc “Operation: Mindcrime” is the second plateau of greatness for the band; they truly arrived. 5th disc “Empire” from 1990, with an album cover eerily resembling the “Queensrÿche” disc of 2013 décor, can boast “Silent Lucidity”, “Jet City Woman” and “Another Rainy Night (Without You)”. By the time 1994’s “The Promised Land” came along, I was really into the band. “Hear In The New Frontier”, in 1997 — a bad year for Heavy Metal — delivered but Queensryche had changed almost irreversibly into something a bit more avant-garde. They were still tons of fun live, though, and there were plenty of well-written songs that had a lot of firepower. The “Q2K” panic of 1999 to “Tribe” in 2003 showed a band in transition, searching. 2006’s “Operation: Mindcrime II” proved to be a great move ahead with one eye looking back. There would be another 3 albums — “Take Cover” 2007, “American Soldier” 2009, “Dedicated To Chaos” 2011 — before Tate’s exit stage left.

Roadrunner Records, known for some heavy extreme choices of bands they have signed in the past like Obituary and Type ‘O’ Negative (actually they evolved from being called Roadracer Records)  picked up Queensryche, who became managed by the great music fan and business mind, Ray Danniels who found the time during the 1997-2002 RUSH hiatus to manage the band. (RUSH would come to release their 20th, and arguably maybe second best or best, studio album on Roadrunner Records — btw — in 2012).

The Jason Slater/Tate compositions didn’t exactly slice and dice like the Queensryche of old and the band splintered into strident hemispheres (many a RUSH fan is also into Queensryche).

Motley Crue are, as I write this, recording their final song of their storied career.

The Rolling Stones have to actually stop for a while, as the “land down under” dates have been postponed.

Metallica’s “Through The Never” is the hottest DVD in all of Metaldom and beyond!

Judas Priest’s “Redeemer Of Souls” title-track and artwork for the new album is posted up on the net 4/28/14. I heard it on anti-music.com. It will be out in full-length glory for the whole world to hear sometime in the red hot summer of 2014. Raise your fists, high in the air! Give the Dio sign! There are 18 songs set to premier this summer! 18 tracks? That sounds curiously like the last album “Nostradamus” with all it’s intros. The new track is a cross between that current ‘Priest album and the song “Savage”. It is a four minute corker that see the band return to Earth with retribution!

Amon Amarth have caught the film bug like Metallica has setting the stage with “Father Of The Wolf”. A nice long vid clip.

Watain’s “Outlaw” has had its title track videoed

Behemoth and Skeletonwitch unleash their dastardly serpent vids, as the dark side basks in its infiniteness. Check out the latest clips on YouTube.