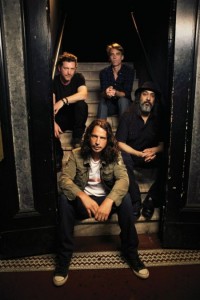 Since the band’s final show in Hawaii in 1997, SOUNDGARDEN fans have hoped that Matt Cameron, Chris Cornell, Ben Shepherd, and Kim Thayil would once again take their exalted rock show on the road. This summer, SOUNDGARDEN will do just that.

The band has recently confirmed that they are in the studio in Seattle, and are writing and recording what will be the first new SOUNDGARDEN album in over 15 years. In the meantime, they will take a break to play a city near you. Today, four shows from their summer tour are announced, with more to come in the coming weeks.

SOUNDGARDEN’s first-ever official concert album, titled “Live On I5”, sold 11,000 copies in the United States in its first week of release to debut at position No. 47 on The Billboard 200 chart. The set is compiled of live tracks from a 1996 West Coast tour by the band and is named after the Interstate 5. SOUNDGARDEN had intended to release the tapes of these shows as its first live album shortly after the tour, but the group ended up disbanding and the tapes were left in the studio, untouched for years.