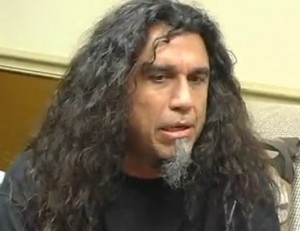 Steve Appleford of LA Weekly recently conducted an interview with SLAYER bassist/vocalist Tom Araya. A couple of excerpts from the chat follow below.

LA Weekly: What’s the latest with [SLAYER guitarist] Jeff Hanneman [who was recently forced to sit out shows after coming down with an infection thought to have been caused by a spider bite]? Is he going to make it to the [“Big Four”] show [in Indio, California on April 23]?

Tom: From what I’m being told, he wants to do the show, but we don’t really know what condition he’s in. He’s obviously doing well enough to play his guitar, so that says a lot that he’s determined to want to play the show. Apparently he’s healing well. He has two tender areas on his arm that cause him pain when he plays the guitar, but he’s eager to play, he’s eager to get back out on the road with us. I know that he’s healing well enough to want to play the show. We’ll see.

LA Weekly: In the meantime, you’ve been playing with someone else.

Tom: Right now we’re playing with Pat O’Brien, the guitar player for CANNIBAL CORPSE. Before him we had Gary Holt from EXODUS. When Gary Holt was brought up, it made it an easier decision to make. He’s a friend, and that to me meant a lot. Then Pat O’Brien came in because Gary had highly recommended him. He said that he could do it and that he was a good guy. Those words mean a lot coming from him. I think Gary is going to come to the show in L.A. and obligated tours that we have, until Jeff feels well enough to come in and play. Gary has committed himself to it. We’ll see how Jeff feels or plays the day of the show. I’m hoping he’ll be fine. What he’s going through, there’s a lot of rehabilitation to his arm. I just want Jeff to get better and stays healthy.

LA Weekly: Most of SLAYER did not participate when the “Big Four” bands joined onstage in Sofia, Bulgaria, to perform “Am I Evil?” Why?

Tom: [SLAYER drummer] Dave Lombardo jams with other people. I’m not a fan of that. I don’t want to go onstage and fuck somebody else’s set up. [Laughs] And then the song “Am I Evil?” … if they were to say, “Hey, we want to do ‘The Four Horsemen’,” I would have been on it. Shit, I’ll do that one! That’s the song I was hoping to hear. When they said they want to do “Am I Evil?”, err… To me it just didn’t represent the Four. It didn’t represent what we do as bands. We play heavier than that. “The Four Horsemen” would have been more appropriate, because it was very representative of the bands. That’s what we’re doing: the Four Horsemen are riding.

LA Weekly: If James [Hetfield] came to you this time and said “Hey, we’re going to do ‘The Four Horsemen’,” you might have a different answer this time?

Tom: I would have a different reaction, oh yeah.