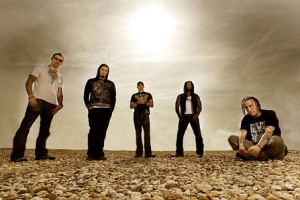 SEVENDUST has been forced to cut its European tour short due to “a few unseen obstacles,” according to guitarist Clint Lowery. He added, “[We] had a blast while we were [there]. We’ll be back.”

“Cold Day Memory”, the new album from SEVENDUST, sold around 27,000 copies in the United States in its first week of release to debut at position No. 12 on the Billboard 200 chart.

“Cold Day Memory” was released on April 20 on the band’s own 7Bros. Records, through Warner Music Group’s Independent Label Group. The CD — produced by Grammy Award winner Johnny K (DISTURBED, STAIND, 3 DOORS DOWN, PLAIN WHITE T’S) — is the group’s first new album with its original lineup back together with Clint Lowery’s return after his departure in 2003.