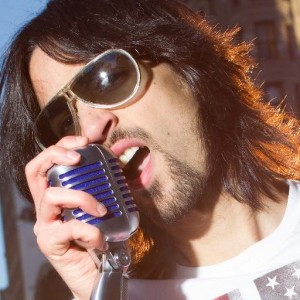 Yeah. Rick Rocker is playing there. And he’s a ding dong, big-time.

The ones that have think they are *it*.

Sporting a nasally country twang, with all manner of odd vocal inflections (the English accent is ridiculous), comes a nubile 22-year-old, hailing from Queens, New York, whose Viking-like (meaning simply a Led Zeppelin III – infused “Goin’ To California”) jones saw him whip out $10,000 bucks to make him sound cuter than Lady Gaga at the age of six.

Yep. That’s how much his album cost to make. It’s true! LOL.

Just to end up more gawky and musically overbearing than Justin Bieber? This kind of stuff is cute when you’re six years old.

Here are a few lines from “Into Your Arms”, the track that follows the plastic video on YouTube. Oh and the video was shot at Lake Giraffe. Isn’t that nice?

“I’ve said my farewells to desperado, one last time. The next time you see my face it will be carved in show-time lights. No more poor boy on the corner.”

The back story concerning the debut album goes that he had an itching to make an album and his instincts told him to fork out $10,000 dollars, leave the deodorant at home, and take a trip to the West Coast to do it.

Those studio musicians, and studio-trash L.A. studio-owners, are laughing all the way to the bank. “Spend The Night” becomes a perfect title for the album when people realize that they can’t spend one more second of their time listening to this Pop-wannabe’s cock rock drivel.

“Stop Talkin’ (Bout Love)” (I’m not making these song titles up) Consist of whining vocals alternating with attempts to hit notes Robert Plant would be proud to reach. Gosh, where’s the power in this man Rocker’s voice? He reaches for high notes and ends up sounding like Tiny Tim on acid.

Then there’s the embarrassing attempt at a Zep stomp that ends up being a RUNAWAYS – like rip-off, circa 1977.

I was flushed and cringing as this record wore on.  “Backdoor Man”. “I Love Rock ‘n” Roll” with Rick pretending to be Joan Jett. Rick wails “I want to be your devil in disguise, I wanna teach you wrong from right. I want to be your Backdoor Man, baby get back”.

God, is this man going to embarrassed by this pablum he and his band of thieves recorded when he reaches 7.

But it doesn’t make it right to rob a blind man.

And Rick Rocker is blinded by arrogance.

Oh yeah. There’s the lip-synched by people-who-most-probably-weren’t-around-in-the-first-place YouTube video number “Spend The Night“. It is the title track. I don’t think those 3 people migrated from Los Angeles because they decided to drop everything and follow their stick-framed leader, Slick Rick, Studio Trick-Rocker.

Rick, Rick, and Rocker? Where’s the audience going to sit? Wait. Those open mics can sure pack ’em in. That is, if there are 50 performers on the bill.

There’s only one direction the second album is going. Rick Rocker should learn how to play and sing first, by listening to his idols ONE DIRECTION more closely, and stop lookin’ below their waists.

(The only one who could give a shit)