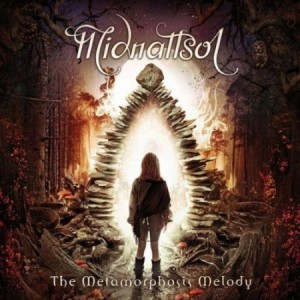 Due on April 25 in Europe and May 3 in North America via Napalm Records, “The Metamorphosis Melody” was recorded at Studio E (THE VISION BLEAK, LACRIMAS PROFUNDERE, SECRETS OF THE MOON) with producer Markus Stock.

Regarding the new album’s title, Carmen stated in a recent video message, “On one side it stands as a great symbol for what we in MIDNATTSOL have experienced in the last months since the release of our last album.

“We’ve gone through a big change regarding band structure, and like you know, we’ve got a fantastic new guitarist, Alex [Kautz], and this had an immense influence on our music; I think you can hear that in the new songs. And at the same time it stands as great symbol for the individual change that each single member of MIDNATTSOL has gone through, so it’s like a personal change as well. But like on all our albums, there is a deeper meaning of the title as well, and the thing is that I don’t want to reveal too much because I want you, the listeners, to make your own interpretations. But what I can say is that the new album should be an encouragement to change, both personally and globally.

“All of the bandmembers in MIDNATTSOL think that this album is the best album we have ever made, so I really, really hope that you feel that as well.”