DEVIN TOWNSEND: ‘As Long As I Can Make Ends Meet, I’m More Than Happy With That’ 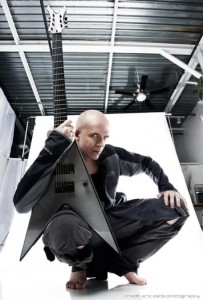 Pure Rawk: At the start of 2009, you announced this four-album series called the DEVIN TOWNSEND PROJECT. What was the reason behind that? Too many ideas for one CD?

Devin: Usually I’ll get down the feelings about how I feel about the period of my life at the time. Moments of emotional importance to me. There have been periods of time that have been very intense, not very intense, full anger, full of sadness or just plain boring. After STRAPPING, the amount of things in my life had changed were more than I’d ever had to process in any one time and as a result of that I found that my writing was veering off in four — sometimes even more — directions. At first I was trying to figure out how to make it all speak in one 74-minute long chunk and it just ended up being so disjointed in terms of one song into the next. Like I was trying to fit “Stand” after “Lady Hell”, “Addicted” after “Demon League” and it just ended up not working. My first impression was that these songs just had a kind of schizophrenic element that I don’t quite understand but allowing them all to be in their own space and allowing them to breathe a little bit — and not having to be dependent on the transitions of songs to flow between each other — you only got, like, two seconds between each one to make this work, right? Like this the statements started making a lot of sense unto themselves and finding that there were songs and thoughts that ended up being chronologically between the four — the way they’ve been presented in summarized that whole period of personal change rather than “neuter” them and put them all into one single or double record.

Pure Rawk: HevyDevy. Release all your own stuff on there. Do bands really need labels anymore?

Devin: It’s HevyDevy through InsideOut and licensed through Century Media. With bands needing labels — no. But I think the thing is there are a lot of things that need to be done that I don’t have the skill-set to be able to do as people who have been doing labels for a long time — and that know how to do it, the press element and all that kind of stuff. The people that work at Century Media are really good people and they know what to do in terms of once the record is done, where gets taken. It’s an older model for sure, however, there is definitely things changing. But at this stage, it really helps to have a team together and handle stuff like doing press. I mean, it’s one thing for me to go on Twitter and say, “Hey, does anybody want an interview?” and do 400 obscure interviews or to hire a company that works independently for a label and solicit it and get all kinds of stuff. Working with the guys I’ve been with in England for the past couple of days are all good interviews. I’m good at what I do, but to be honest, not a whole hell of a lot else! As much as I like to think I’m great doing things, fixing pipes or whatever, I’m shit at most things other than music (laughs). Will I be treading water for the rest of my life? Possibly, but I just enjoy doing what I do. As long as I can make ends meet, I’m more than happy with that.

Pure Rawk: You’ve got two shows at the Union Chapel in Islington on November 10th and November 13th. Playing “Ki” and “Ghost” under the title “An Evening with the Devin Townsend Project”. Apart from the albums, what else can audiences expect? Especially to someone who may not have seen you before?

Devin: I’ve got four shows that I’m trying to put together. They’re a blow-out at the end of the year that allows the whole thing to be summarized and so we’re trying to make sure we have these four shows — hopefully four — that we can play the four albums and then some older tracks to film for DVDs. That’s the goal at this point and I know those two have been announced. We’re looking towards the possibility of others but that’s definitely how the end of the year is “supposed” to play out. You know what, though?! At this point I’ve got so much touring to do that I’m making sure that it’s all going to make sense.

Read the entire interview at the Pure Rawk web site.