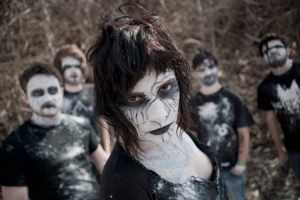 Known for its relentless touring and one-of-a-kind, fearless live show, IWRESTLEDABEARONCE — the Shreveport, Louisiana quintet now transplanted to Los Angeles, California — has announced a change in musical direction. The group’s foray into black metal is exemplified by its newly designed logo and band photos.

“We were sick of getting lumped in with ‘scene’ and ‘whatever-core’ bands, so we decided to embrace our roots and just go straight black metal on the new album,” says guitarist Steven Bradley. “I’d say 90 percent of the new record is straight-up black metal, so we had to change our image to match… Because, of course, that’s just as important, if not more so, than the music.” 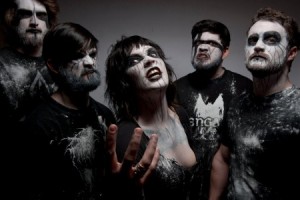 IWRESTLEDABEARONCE recently completed work on its second album at the band’s former house in Birmingham, Alabama. Guitarist Steven Bradley told Alternative Press about the 10-song effort, “In terms of [a] heavier style of music, we don’t really know how to do anything other than ADD heavy music with random whatever parts thrown in. If people enjoyed the last full-length, they would, I assume, enjoy this one. It’s the same style, but taken in each direction further — it’s got the heaviest stuff we’ve ever done and also has the catchiest stuff we’ve ever done and then weird stuff. I never know how to describe our music.

“Not that we’re METALLICA, but we have our little style of music that we always seem to write,” he continued. “I don’t know; I feel like it might not be the best thing alive, but I definitely feel like we have our own style of putting things together, so I don’t know that we’ll ever stray too far from that, I suppose.”

He added, “We know what we like — and whether we want to or not, [we] have a certain way that we seem to always do things. There’s] not a pre-decided structure or anything, but you can pretty much always count on having some heavy stuff, some softer, epic stuff and some random jazz or weird things thrown in. If people are down for that, then they should be down for this.”

IWRESTLEDABEARONCE’s new album is due this summer via Century Media Records.

The band’s last CD, “It’s All Happening”, sold 4,300 copies in the United States in its first week of release to debut at position No. 121 on The Billboard 200 chart. The effort landed at position No. 1 on the Top New Artist Albums (Heatseekers) chart, which lists the best-selling albums by new and developing artists, defined as those who have never appeared in the Top 100 of The Billboard 200.