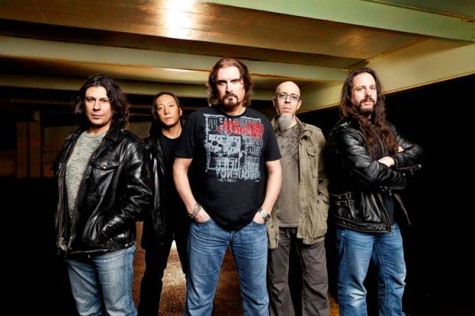 Michael Schetter of Prog Sphere conducted an interview with vocalist James LaBrie of progressive metal giants DREAM THEATER when the band performed at the Night Of The Prog festival on July 9, 2011 at the Loreley, Germany. A couple of excerpts from the chat follow below.

Prog Sphere: How does it feel to be the undisputed frontman of the band for the first time in 20 years?

James LaBrie: The undisputed frontman? You know, I mean… it was such a weird dichotomy, if you think about it. It’s funny, you mentioning that, because we, the guys in the band, we were talking about that everything is much more balanced, everybody is in their role or in their position. So it’s where things should be on stage, where it’s not somebody in the background trying to grab the limelight when maybe they should just be grooving or whatever. But I mean, that’s [former DREAM THEATER drummer Mike Portnoy’s] character, that’s just his personality. He’s big and he wants to be in the limelight. But, unfortunately, the problem with that is that it takes away from the bigger picture — and that is the band as a unit. And a lot of people have been commenting on that since we started out on this tour, saying, “It feels more like I’m watching a band, with somebody up front singing and interacting, everybody else just back there and (makes drumming and guitar playing gestures). Everyone kind of assumes what they’re doing. And then there’s always moments in the night when there is the spotlight on these other members and it should be. But it creates more a balance. And we were talking about this, we were saying, “You know, this is really cool.” It feels like a unit. So it’s a lot better.

Prog Sphere: I don’t want to dwell on this for too long, but several people have asked me to bring it up: Are you still in touch with Mike Portnoy?

Prog Sphere: Have you talked to him at all this year?

James LaBrie: I haven’t talked to Mike since the announcement he was considering leaving the band. And then… Actually, I should say the last time I verbally spoke to him and I heard his voice was on the conference call when he finally said “Yes, I’m leaving the band”. So that was it.

Prog Sphere: Not sure if you realized that when you were putting it together, but the setlist doesn’t feature a single song where the lyrics were written by Mike Portnoy…

Prog Sphere: The setlist is pretty varied, but kinda safe — it’s all album tracks. Are you going to add some B-sides or really rare stuff like “Speak To Me”, “Eve” or “Space-Dye Vest”, which hasn’t been performed by the full band yet?

James LaBrie: At this point there’s no talk about that. The fact is that this is a whole new chapter for us, obviously. We have a new album coming out September 13, so the focus is really on making sure that that is set up properly, that that is going to get the attention it deserves because we’re extremely proud of it. At this point anything like that, any of the b-tracks or whatever you want to refer to — any extraneous parts to DREAM THEATER are still going to remain in the background — right now! I’m not saying it’ll never happen — right now!

Prog Sphere: So did you have a specific goal what you wanted the album to sound like…

James LaBrie: Yeah, we definitely knew where we wanted to bring it.

Prog Sphere: …was there something that you wanted to avoid that has happened in the past?

James LaBrie: We just wanted to make a very classic DREAM THEATER album and to us a classic DREAM THEATER album would be the progressiveness with the metal, but very balanced and very complementary of one another, not one overtaking the other and not one seeming predominant throughout. So it was kind of a very conscious effort to make sure that we were touching upon some of the really classic moments in our history that really spoke loudly to us, saying, “You know, that was cool when we did something like that, or when we had that kind of vibe or that direction musically going. That’s what we need to recreate, but make it sound like it belongs today.”

Prog Sphere: “On The Backs Of Angels” sounds very much like classic DREAM THEATER, especially since it doesn’t sound like any other bands. There are no bits that sound like METALLICA or MUSE, for example. Many people complain about these things – does this ever get discussed within the band?

James LaBrie: No, we don’t sit down and go, “We can’t sound like MUSE, we can’t sound like…” We don’t do that. But I think that we’re all subconsciously thinking ,”Whatever we’re doing here, we gotta feel right about it — that it sounds like us, first and foremost.” And especially with this album, because we knew there was going to be a lot scrutiny, there was going to be a lot of room for skepticism. So we knew that the best thing we can do here is be true to ourselves, first and foremost — which we always have been — but let’s bring it to another level. Let’s really push the envelope here of who and what we are and really make it something that is undeniable, that it’s definitely who and what we’ve always been — but better.