CORPSET: ‘Into The Light’ Video Released 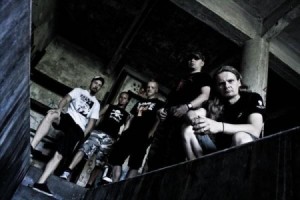 Into The Light, the new video from Finnish death metallers CORPSET, can be viewed below. The song comes off the group’s debut album, “Ruins”, which is scheduled for release on April 27 via Violent Journey Records. The CD was recorded at various facilities — from professional studios to a horse ranch in the Finnish countryside — and was mixed and mastered at the Coal Hole studio in Hämeenlinna with the group’a former bassist and studio pro Janne Tauriainen.

According to a press release, “Ruins” is “a ruthless ten-piece of contemporary Finnish death metal. With combining old-school sounds to more modern approach and joining hook-filled melodies with pure aggression, ‘Ruins’ is sure to put Finnish metal-scene on its knees. CORPSET, holding some familiar names from different well-known Finnish acts in their lineup, has managed to create a breath-taking example of twisted Finnish death metal and is a welcome breeze of fresh air to today’s stiff metal soundscapes.”

A CD-release party will be held on Friday, April 29 at Vastavirta Klubi in Tampere.