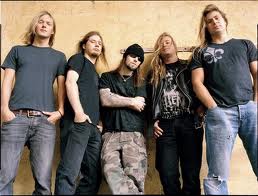 Fedja of CraveMetal.com conducted an interview with drummer Jaska Raatikainen of Finnish metallers CHILDREN OF BODOM when the band performed at the O2 Academy in Birmingham, England on April 8, 2011 with AMON AMARTH. You can now watch the chat below.

CHILDREN OF BODOM is working on a photo book, and you can be a part of it. The band states, “it’s dedicated to the whole worldwide Hate Crew and that’s why we want you to be in it. We’ve been shooting life on the road, the Hate Crew and all kinds of crazy shit for over two years. Photography will continue at the shows this summer — stay tuned for more info soon. Keep an eye out for our Facebook page to know where we’ll be shooting!”

“Relentless Reckless Forever”, the new album from CHILDREN OF BODOM, sold nearly 11,000 copies in the United States in its first week of release to debut at position No. 42 on The Billboard 200 chart. The band’s previous CD, 2008’s “Blooddrunk”, opened with 19,000 units to land at No. 22. This number was roughly four times the opening tally of “Blooddrunk”‘s predecessor, “Are You Dead Yet?”, which premiered with 5,000 units back in October 2005 to enter the chart at No. 195.