CANNABIS CORPSE To Release ‘Beneath Grow Lights Thou Shalt Rise’ 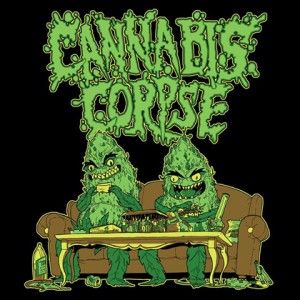 CANNABIS CORPSE — the Richmond, Virginia-based old-school death metal band featuring Philip “Landphil” Hall (bass) from MUNICIPAL WASTE and his brother Josh “HallHammer” Hall (drums) — has completed work on its brand-new full-length album, “Beneath Grow Lights Thou Shalt Rise”. The CD will be issued on July 12 via Tankcrimes, the label that issued the band’s “The Weeding” EP back in 2009.

On “Beneath Grow Lights Thou Shalt Rise”, CANNABIS CORPSE has ventured even further down the left-hand path to pay homage to those other masters of death, MORBID ANGEL and DEICIDE. Tongue-in-cotton-mouthed-cheek titles like “Lunatic of Pot’s Creation” and “Immortal Pipes” keep the party rolling, but don’t be fooled: CANNABIS CORPSE is not a joke band. Sure, they’ll fire up a bowl and chug a beer, but then they’ll rip your face off with a brutal old-school death metal assault, the likes of which haven’t been seen since the seeds of the genre first began to grow.

Mixed by Erik Rutan at Mana Studios and mastered by Alan Douches at West Side Music, “Beneath Grow Lights Thou Shalt Rise” was recorded by the band’s own Phil “Landphil” Hall, and reeks of DIY putrefaction.

In other news, CANNABIS CORPSE has several dates booked for the coming months; the band features various members of MUNICIPAL WASTE, PARASYTIC, BATTLEMASTER, and VOLTURE, so you know these dudes can throw down live.