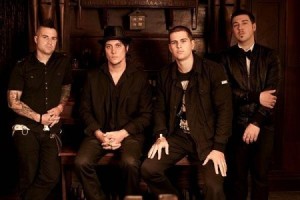 AVENGED SEVENFOLD has landed at position No. 1 on this week’s Billboard.com “Hot Tours” rankings with more than $3.6 million in box office grosses reported from the “Welcome To The Family Tour”, which featured opening acts THREE DAYS GRACE, BULLET FOR MY VALENTINE and SEVENDUST on select dates. AVENGED SEVENFOLD was also one of the headliners at Carolina Rebellion in Charlotte on May 7 with 30,000 fans in attendance. The event’s main stage also featured performances by GODSMACK, THREE DAYS GRACE and STONE SOUR, among other bands.

AVENGED recently premiered a music video for its latest single, “So Far Away”, which is a tribute to the band’s late drummer James “The Rev” Sullivan, who died from an accidental overdose of prescription drugs.

Following Sullivan’s death, the band recruited his favorite drummer, ex-DREAM THEATER member Mike Portnoy, to record the drum tracks for its latest album, “Nightmare”, and tour with the band through 2010.

The group recently recruited new drummer Arin Ilejay, who has also recorded a new song with the band called “Not Ready To Die” for the Call Of Duty: Black Ops video game.

AVENGED SEVENFOLD will be on tour in Europe and Australia throughout June, July and early August before coming home to headline the Rockstar Uproar Festival tour, which will kick off on August 26.

« SYSTEM OF A DOWN: Inglewood Footage Available JASON BONHAM’S LED ZEPPELIN EXPERIENCE Forced To Postpone Shows Due To Illness »