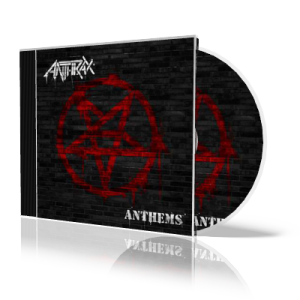 Any band in 2013 that uses the pentagram means they are worshipping the devil, or are just plain using the imagery to be very shocking.  This is not 30 years ago when Motley Crue could ‘Shout At The Devil’ and Iron Maiden could proclaim via Vincent Price that ‘666 is a human number’ and call their album ‘The Number Of The Beast’, and be taken with a grain of salt as nothing but Heavy Metal making thunder and lightning while  looking up to Black Sabbath for mentioning the horned Beelzebutt in awe. (We all love Ozzy and think he’s a character and forgive him for biting bats heads off as he’s down with Mr. Tony ‘Iron Man’ Iommi. Iommi is the best Heavy Metal guitar player who will ever walk the Earth.) Now, in a post-9/11 world – that fateful day of September 11th, 2001 in New York City and Washington D.C. that brought to bear the meaning of horror and darkness; out of the same city stupidly walks  Anthrax like nothing ever happened. They live in a vacuum and their last album had a giant pentagram also and said ‘Worship Music’. Whose music? Theirs? Is Scott Ian on guitar of Anthrax to be bowed down to? Does he think he is Kerry King of Slayer? Do Kreator/Destruction/Sodom/Venom/Bathory/U.D.O./Doro/Accept not do thrash 1000% better than these punky poseurs?

And to make matters worse, one of Death Scream’s deserving recipients of being one of  the Top 50 of The Worst Heavy Metal Bands of all time in our hugely tumultuously popular and controversial laundry  list of the over rated whose continual waste of petrol to make vinyl records is a darn shame. And to make matters much worse they lead off with ‘Anthem’ by RUSH who do not – I repeat do not – have a pentagram on their 1976 ‘2112’ album as these duefists in Anthrax haven’t the brains to know and the kind of attitude that gives any connotation of Thrash or Punk Metallers a very, very bad name. They pride themselves on having a low overall band IQ. And think it is cool, somehow.

Charlie Benante, who stole not one of my girlfriends but two  – though I certainly don’t give a hoot about that anymore in the least –  and only mention it because it happened when I would hang out in the Bronx with my band Cold Sweat (see deathscream.net’s list of bands from New York who made it to find Cold Sweat with one cool skulldude-on-ice logo) and I made the mistake of letting Anthrax drummer Charlie check out a  ripping volley of Heavy Metal originals like only the wizards in my band could deliver. Charlie exclaimed, much to my chagrin – as I figured he must be up to something – ‘This is great!’.

He was about to turn over some Cold Sweat bona fide Metal Music with some of  my band’s choice riffs to his boys in Anthrax (and he actually could play guitar better than both of their guitarists at the time) who were always too busy reading comic books and skateboarding, and having fun with each other with whipped cream (I kid you not!) to bother getting serious about making some songs that didn’t reek like old cheese.

On to this covers album: What’s to say? Charlie Benante is a great drummer. I can’t take that away from him. And Dan Lilker a really great guy and fine bass player who had the sense to cut out on this band very, very early in their ‘Madhouse’ career. (So some other scrub bass player is farting low notes on this pathetic platter of poop.)

Why put up with a singer (and they had about 9 more singers, at least, to come down the pike before taking this guy back) who would come out playing cowboys and Indians replete with Injun headdress going wuh-wuh-wuh-wuh. Belladona sorrowfully sang ‘Cry for the Indians – Die for the Indians’ just because they couldn’t find anything to really sing about.

And Anthrax  remained vacuous from the day they were spawned. There are covers on ‘Anthems’ of Boston, Cheap Trick and Thin Lizzy that show that the band’s learning curve musically  stopped in the late 1970s. There is even a Bon Scott-era AC/DC cover whose first line is note perfect and then becomes the most belabored unfun AC/DC cover I have ever heard.

There are even a few cover tunes that I warn you to hold your nostrils together for. Or hit the stop button/ take the disc out/ and make believe you are aiming to send the band to a distant black hole in Cygnus X-1. No one will have to hear another note by Anthrax. The Ramones were cool. Anthrax is pure crap.

Fer chrissakes, people are gonna start with the pentagram b.s. about RUSH because of these jerks in Anthrax. I don’t like how crass and dumb they are. And never ever did. Anvil, Spinal Tap, Overkill, Twisted Sister, W.A.S.P. and Raven are the real deal from that era and still remain so.

Oh I forgot – Anthrax, in their own dumb words; ‘brought the noise’. These street punks singlehandedly poisoned the pure Heavy Metal blood bank by hooking up with (C)Rap people to usher in the new age where young kids try to be heavy metallers and snoop dogs at the same time by wearing headphones and walking down the street talking to themselves going ‘Nigga be in my face / yo yo give me a loosey – I check out my homey’s crib’. Could you imagine Neil Peart writing anything like that?

Well RUSH did have that working title for a ‘Clockwork Angels’ song – later to be called ‘Headlong Flight’: ‘Take That Lampshade Off Yo ‘Head’. I even cringe when I hear ‘Roll The Bones’ from 1991 with the dumb Rap part in it. Other than that I love 99% of Rush’s music but we ain’t talkin’ about a great band here. We are talking about facing the Anthrax that should not be (famous).

Anthrax are part of the big four for what? Unlike Slayer, Metallica and Megadeth they have never made a ‘Reign In Blood’ or a ‘Master Of Puppets’ or a ‘Peace Sells…’ masterpiece of epic Thrash proportions.

Listen to Manowar from New York or Type O Negative/Carnivore or Warrior Soul from New York and tell me that Anthrax is better. And I will ask you how much did they pay you to say that?

Or have you been braindead since birth?

Anthrax should cease and desist.