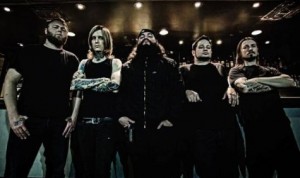 Members of Oakland, California’s extreme metal band ALL SHALL PERISH took part in a live chat this past Thursday (May 26) at the Nuclear Blast Streaming Room. You can now watch the question-and-answer session below.

Audio samples of all the tracks that appear on “This Is Where It Ends”, the fourth full-length album from ALL SHALL PERISH, can be streamed in the YouTube clip below. The CD will be released on July 26 (North America) and July 29 (Europe) via Nuclear Blast Records.

The majority of the follow-up to 2008’s “Awaken The Dreamers” was recorded and mixed once again at Castle Ultimate Studios in Oakland with producer Zack Ohren (LIGHT THIS CITY, DECREPIT BIRTH, SUFFOCATION).

“Divine Illusion”, a brand new song from ALL SHALL PERISH, is available for streaming on the band’s Facebook page. “Like/share” the band on Facebook in order to hear it.

ALL SHALL PERISH has been added to this year’s installment of the Rockstar Energy Drink Mayhem Festival. The 26-date trek, which is scheduled to kick off on July 9 at the San Manuel Amphitheater in San Bernardino, California, will also include DISTURBED, GODSMACK, MEGADETH, MACHINE HEAD, IN FLAMES and TRIVIUM, among many others.