I would like to explain how Death Scream has decided what are the worst heavy metal bands of all time.

What certainly gets our ire is a band that has had well known record companies waste their time and money releasing music by Heavy Metal bands that aren’t really any good at all.

This has happened disturbingly often in this world’s music business with record executives having tin ears and dollar signs for eyeballs.

To be the worst, though, takes a concerted effort on the part of the band in question to have lousy music, lousy album covers, a stupid image, talentless musicians and lyrics that are sheer stupidity.

Spinal Tap is a good example of a band who certainly won’t make my list as they did a successful parody of just what it means to be Heavy Metal as is evidenced by a song like ‘Smell The Glove’.

No, dear reader, that be sheer brilliance.

When you see a name like Abazagorath or Ostrogoth, two real bands with really stupid band names, you had better be good because your band name sure the hell ain’t.

Then there are countless Metal Underground bands who have put out album length demo tapes by sticking a microphone in an empty smelly beer bottle in the practice pad.

Satan’s Massacre, from the United States, in the mid-1980’s characterized this sort of nonsensical approach to producing music for the masses in the form of ‘Robbing The Graveyard and Raping The Dead’.

‘Robbing The Graveyard’ had a xeroxed black and white paper inside a Memorex or even lower quality cassette tape sporting a crap drawing of something ‘evil’ on the cover face.

On the recording the ‘singer’ snarled and snorted his way through approximately 8-10 kindergarten level songs save for the instrumentals that featured only the music.

I’m not sure about Satan’s Massacre as I don’t feel like wasting any of the sand left in my life’s hourglass on listening to such a subhuman effort again, but on a lot of band’s crap demo tapes there was a necessary musical instrument missing; it was usually the bass guitar. Or sometimes the drummer had only one cymbal that had the sound of a sheet of aluminum foil being struck with a pen, or something.

Unfortunately, some of these performances, though thankfully not Satan’s Massacre, as far as I know anyway,  got pressed onto vinyl, cassette and/or CD, in mass quantities by some desperate small record company who snapped up the goods.

Not always a bad thing as is evidenced by the Death Metal band Sadus’ debut D.T.P./Death To Posers cassette tape or Germany’s Blackened thrash/death metallers Poison, who never got a proper recording contract even with all the countless record labels that were and are out there; with their best demo tape pressed onto vinyl years after being recorded.

Then there are bands that have a gorgeous album cover depicting four dead zombies, which reminds of Exorcist’s 1986 LP, ‘Nightmare Theatre’. An album that boasted ridiculous chant-along songs like ‘Call for the Exorcist’. Then, without warning, the lead vocals disappear up the ying-yang to make matters worse. Venom’s debut LP ‘Welcome To Hell’ is one of the worst sounding records in the annals of Heavy Metal history yet it will not take the top spots that are reserved for absolute clunkers.

There are certain countries that seem to specialize in crappy Heavy Metal bands that make crappy albums with France, Austria and, not surprisingly, the United States leading the pack.

Where else but the United States can you sing out of tune like Hirax’s Katon W. De Pena and watch the packed club full of drunk people howl their guts out in delight. Then not unlike automaton robots with no brains they go out and buy the retard records that Hirax made. Inside the record store they oooh and ahhh as they hold up the different colored vinyl versions that are available.

Sheer madness prevails on this planet and the Metal Underground has it’s share of pickled options in the form of the worst Heavy Metal bands of all time.

When the Heavy Metal genre was still in it’s dawning stage in the late 1960’s and 1970’s Hard Rock bands started pushing the envelope on extremes. What sometimes happened, like in the case of Horslips, is that their brains swelled inside their cranium shells causing ordinary musicians to think they were geniuses and rocket scientists.

Bizarre albums that made us all uneasy resulted. Some fools would rush out to proclaim that they had struck gold by discovering blithering idiots like this Horslips band.

Fortunately for all of us there was Steppenwolf to coin the phrase ‘Heavy Metal Thunder’ in the song ‘Born To Be Wild’ and wise young ones the world over started cranking their amplifiers.

So let’s take a walk on the wild, stupid side where only the dimmest light enters as Death Scream presents The 50 Worst Heavy Metal Bands Of All Time’.

An obscenely bad band logo with certain letters that look like those nasty photos of what microbial bacteria look like greet us on the”Winter Kill” 1985 debut LP by this Chicago, ill-noise(!) bunch…   Read More

With a simpleton rhythm section and a cool guitarist (yep!), Horslips made some of the most useless ’70’s prototype Metal music on this green Earth…   Read More

“Hosanna Bizarre” and “Trans C*nt Whip” are two albums by this sad masochistic bunch. They made it to…   Read More 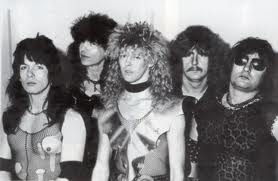 These very metal Noo Yawkers released ‘Unlaced’ in 1984 and ‘Get It While It’s Hot’ in 1987 on Mausoleum Records. The sound of Blacklace is akin to smelling human…   Read More

Exorcist are next on the chopping block. This is a side project released in…   Read More

Billing themselves lately as True Cult Metal, all I can say is that pick whatever album…   Read More

These Californians put out a thrash album, a mini-LP on vinyl in the heady days of the 1980’s by Wild Rags…   Read More