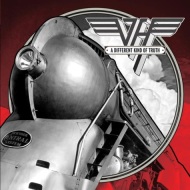 Releasing “Tattoo” as the first single introducing the second David Lee Roth era of VAN HALEN was ill advised, as it gives the impression that the entirety of “A Different Kind Of Truth” is a second-rate attempt at a comeback, not to mention a lyrical disaster made worse by Roth‘s attempt at reinventing his heyday hipness. The good news is that “Tattoo” gets a pinch better after a handful of spins and the great news is that it is the worst track on “A Different Kind of Truth”, an only moderately inconsistent album that sends one all the way back to the glory days, as best defined by the first four VAN HALEN albums.