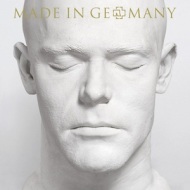 Sixteen years’ worth of material represented by 16 tracks, including one new song (“Mein Land”) and the common denominator on RAMMSTEIN‘s “Made in Germany: 1995 – 2011” is the consistency of style. If one didn’t know any better, he might not even realize this to be a greatest-hits collection since for the most part the RAMMSTEIN stamp is omnipresent across the album, a handful of minor detours notwithstanding. The approach does not give the impression of stagnation however, but of progression within an established stylistic framework. Whatever the opinion of the methods employed by the Germans over the years, the fact remains that they’ve written numerous songs that are as uniquely catchy as they are ironclad tough.