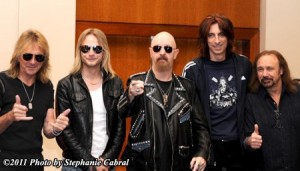 On the band’s upcoming farewell tour:

Tipton: “It’s not the end of the band, by any means. It is our last world tour. It takes a big chunk of your life — 18 months, really, of being out there. We’ve been doing it for nearly 40 years now. It’s not to say that it will be our last shows, and we certainly will [be] — and have been — recording, so chances are that there will be a [new] album as well next year. We would never turn down the appropriate date if we were offered it at some point in the future, but it will be our last world tour. It’s probably the last chance that most people will get to see JUDAS PRIEST live. We wanna go out one final time and play our songs and just be together with the audience.”

On the musical and lyrical direction of JUDAS PRIEST’s new material:

Tipton: “It’s quite a mixed bag. Really, there’s more sentiment on this album. In a way, I suppose, it’s also our farewell album. There are some anthems on there, which pay tribute to our fans; it’s our fans of saying thank you to the fans for all the years.”

Halford: “I think what really is important is that you still have this desire, this passion — it doesn’t diminish in nearly 40 years; we still have this tremendous love for what we do in heavy metal music and the fans that have supported us are a constant inspiration. And I think we all agree that as much as we were very happy with the way [the JUDAS PRIEST concept album] ‘Nostradamus’ came out — that was a great moment for us, because we had been waiting forever to make this concept album — that’s not the end with ‘Nostradamus’. We wanted to make, at least, as Glenn said, one more great metal album with all the great ingredients [that make] PRIEST [music what it is].”

Tipton: “We’ve [already recorded and] mixed three [new] tracks, which we might put on our web page, because, as I said, some of the songs are a tribute to the fans — a big ‘thank you’ to the fans for all the years — so we might do that; we haven’t really decided [how we’ll release them]. But that’s one of the suggestions. I think we’ve done about 10 songs, but they’re not finished — three of them are mixed, the rest [need more work]. And, of course, we haven’t done any collaboration with Richie yet. So it’s early days, but there will be an album at some point — we just need time to finish it, really, and that depends on the touring schedule. ‘Cause even if you get a break, when you’ve been on the road two or three months playing every night, you probably don’t feel like going into the studio. Sometimes you need to walk away from music for a little bit. But at some point next year, I’m confident we’ll release an album.”

On Richie Faulkner’s addition to the band:

Tipton: It’s amazing, really. When Ken [former JUDAS PRIEST guitarist Kenneth ‘K.K.’ Downing] told us and said he leaving PRIEST, we had two choices — we either carry on and do the farewell tour, or we could have ended the band. So, obviously, we had to find the right guy, and honestly, we couldn’t have had any better than this guy. The most amazing thing is he satisfies everybody’s needs for how PRIEST should sound, but he does it in his own way. It’s pretty unbelievable; he blended into the band straight away. And, as Rob said earlier on, honestly, if we hadn’t found Richie, I don’t think we would be going out [on tour] now, so it’s just worked out really, really well for us.”

On what Richie has brought to JUDAS PRIEST’s sound compared to K.K. and how it feels being part of the band:

Faulkner: “I come from [the classic-rock] era — [LED] ZEPPELIN and [JIMI] HENDRIX — and I think K.K.’s playing was Hendrix-inspired as well, so that’s kind of similar there. What it feels like to be a part of it, you can only image — it’s kind of surreal, really. But as a fan of the band and the genre, they are big shoes to fill, but I know what I do and I’m not trying to… As a fan, and as part of the band now, it’s exciting — as a guitar player and as a musician.”

On whether it was difficult learning JUDAS PRIEST’s songs:

Richie: “I knew some of them already, to be honest, and it’s where I come from musically, so it wasn’t difficult in a sense.”