BUCKCHERRY: Trip To Iraq To Play For The Troops Postponed 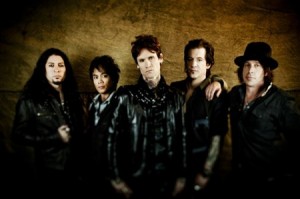 “We’re truly bummed that our trip to perform for the troops in Iraq at the end of April needs to be postponed due to an injury to our drummer. He’s doing well, but unfortunately, is not able to play. These performances for our brave men and women in Iraq and Kuwait are so important to us, we want to bring our rock show the way we always do. We’re looking forward to seeing you on the road soon. We appreciate all of the letters our fans have entrusted us with to deliver to your loved ones in the Gulf and we will make sure that they are delivered with a note from us as well.”

Added drummer Xavier Muriel: “I busted up my hand and after a minor surgery am recovering well, just not well enough to play by the time we were scheduled to play the shows in Iraq and Kuwait. I’ll be healed and ready to rock the shows we have at the end of this month. We will see you soon.”

The band’s latest album, “All Night Long”, sold around 28,000 copies in the United States in its first week of release to debut at position No. 10 on The Billboard 200 chart.

BUCKCHERRY’s fourth studio CD, titled “Black Butterfly”, opened with around 47,000 units back in September 2008 to land at No. 8.