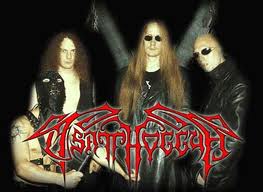 “Hosanna Bizarre” and “Trans C*nt Whip” are two albums by this sad masochistic bunch. They made it to number five on my list of worst heavy metal bands ever by sheer co-incidence that I revisited their “Trans” album as a retro review here on Death Scream.

Only a band called Genitorturers do this sub-subgenre of Torture Metal better.  Death/Black Metal never sounded so uncool.