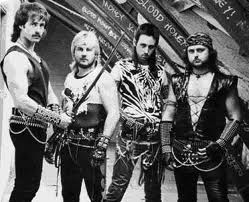 ‘Taking the pi*s’ as the bloody England dwelling person would say; the British version
of Spinal Tap had two albums released on Ebony Records called “Red, Raw and
Bleeding” 1986 LP, and “Battlescarred” 1987 LP.

The difference between Blood Money and Spinal Tap, though, is that nobody was laughing.

Blood Money seem like they just formed so they could get some loose, crack or heroin addicted females over to the band’s rehearsal pad.

“Red, Raw and Bleeding”‘s album cover, first off, looks like a bunch of sheets of toilet
paper after a person has bled onto them from a finger cut. Besides the blood stains
there is a bloody chainsaw drawn up in pretty stupid fashion.

Check out their song titles: “Death Heavy”, “Metalyzed”, “Stormer”; I could go on but
you get the drift.

This band is Metal Crap. One of the members of Blood Money went on
to form a death/doom Metal project called Xanthoma. Yuck.