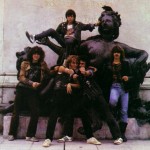 This French Heavy Metal band have the distinction of being host to the worst singer ever in the long storied history of the genre.

Oxenkiller self-imploded after only one Mini-LP, ‘Monster Of Steel’ on King Klassic Records. I believe you might still be able to find this album on Shadow Kingdom Records.

Get it for someone you hate.

Regis Costechaareire sang in French on an earlier version of the album that would have came out in 1986.

One of the songs on the Mini-LP is called ‘The King Is Dying’. Mr. Costechaareire is the one who sounds like he’s dying. The rest of the band are actually competent musicians which don’t mean squat in this business.

This band never even had a proper logo, instead choosing to go with the band name, Oxenkiller, spelled out in yellow letters.