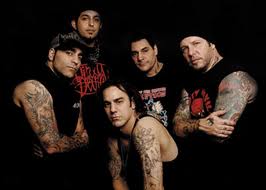 This hard-hitting band made ‘stage diving’ a Heavy Metal household word. I don’t really want to get into the whole topic, but Crossover and Hardcore bands have led to everything from ‘Straight edge‘ to Alternative to curious forms of Extreme Metal like Sludge and Power Violence, to what passes today as Brutal American Death Metal which now carries a lot of Hardcore Punk influence and perhaps always did.

I don’t really know either how much the Agnostic ones had to do with any of this but I figured that now would be a good time as any in this long overdue article on New York’s Metal scene to mention all this.

Agnostic Front have stood strong and withstood the test of time as can be ascertained from checking out 2007’s ‘Warriors‘ LP and mayhaps picking a copy of ‘My Life, My Way‘ that has come out for 2011. Agnostic Front are a band that is still very relevant.