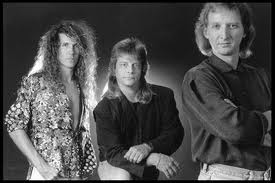 Their major label debut LP from 1983 came out on Atlantic Records highlighted by the singles ‘Tell Me What You Want‘ and ‘Who’s Behind The Door‘.

Now a staple band on Classic Rock radio stations across the United States, at  least, this band goes a long way to prove that the term ‘Classic Rock‘ is just plain non-descript and a bit ludicrous when considering the fact that they are playing these songs by Zebra which I believe sure the heck ain’t Classic Rock as I know it.